As I sat scrolling through Twitter a few weeks ago, I came across a conversation that set me thinking. Kath Evans (Head of Patient Experience at NHS England) was asking if people preferred an image showing “the ladder of participation” or “the circle of involvement”.

Initially I sat and thought “definitely a circle” – much more inclusive. I didn’t like the ladder, ladders feel hierarchical, you have to climb a ladder and you can fall off one too. The general chatter agreed with the circle idea, although a few liked the idea of the ladder and aiming for the top rung. Then someone threw a spoke in the wheel , they suggested that it should be a venn type diagram, not a circle and not a ladder. It provided more individuality. I thought “yes, that’s true” but then as it was the Easter Holidays and my children were insisting I practised real involvement with them, I turned Twitter off and went to discuss a much more important topic for my son – why had George Lucas sold his company to Disney when Disney had turned down Star Wars originally (*).   This conversation took rather a lot of brain (and Google) power so the chat about circles, ladders and venn diagrams had to take a back space.

That evening though, once hubby (or “re-enforcement” as I call him during the holidays) arrived home, I went back to thinking about the diagrams and I really struggled to decide which worked best to model participation. Was it the circle – all inclusive, surrounding the child, person centred; was it the Ladder – a climb or was it the Venn diagram – individual, different routes for different people?  What does Participation look like? 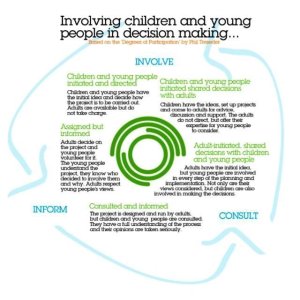 I just couldn’t decide. However, it suddenly hit me. The reason I couldn’t decide wasn’t because the diagrams were wrong, it was just that they have to be used together.

On a stand alone basis, the diagrams tick a box and say “hey look what we are doing, we’re inclusive and encourage participation, we even have a diagram to show you how it works”.  Throughout the SEND reforms, I sat in numerous meetings and I am fairly certain that a circle diagram was used in almost every one. “We need parents to be listened to, let’s put them in the centre of the circle. “ “We need the child to be the focus, let’s put them in the centre of a circle.” Even better “let’s put the family at the centre of the circle.

Diagrams are great, they can help people to visualize what something should look like. So why don’t they work alone?

Have you ever had a kitchen designer come up with plans for a new kitchen?  They send you lots of lovely images of what your dream kitchen could look like but when you get it installed, it looks nothing like the diagram you were sent? Why not? It’s because the designers add lots of little extras (lampshades, ceramic bowls, mirrors, picture frames, flooring, etc) to the images to make you look at them and think “wow, yes I must have that one”. That’s what the Circle and Venn Diagram does for me. It shows the ideal, it sells itself to me by creating a feeling within me, it makes me want it. It becomes a must have, a goal. However, goals involve details. The goal is the final outcome, the way we get there involves effort and working together and of course, all the little details.  The ethos behind the Children and Families Bill is the goal, but we’re no where near it yet.

Is Participation a Ladder to the Circle?

So, maybe, we need everyone to be realistic and the diagram should be a Ladder to the Circle. The circle is the final goal, it’s what we want but we need to climb a ladder to get there.

The ladder will have numerous steps and each school, therapist, Local Authority, CCG, Primary Care Trust and Social Services team will be starting on a different rung. As we know, there are some great practitioners out there so they will make the journey easier but staff often leave so we have to be prepared to possibly fall back a rung or two. Perhaps we need to think of it as Snakes and Ladders. Get a good practitioner, LA and rush up a few rungs of the ladder. Hit a “jobsworth” and slide back down.

So many people are telling us how great the new system is but the culture change needed to ensure that participation and inclusion is available (and actually doing what it says on the tin) needs a lot more work.   We have to climb a ladder of participation to get to the Circle of Involvement. Some practitioners and LA’s are climbing faster than others, they want to reach the top. However, many are afraid of heights so they are holding on to their current rung for dear life and refusing to budge. Others are just exhausted and trying to juggle as they climb.

We need to realise that “involvement” or “participation” is a goal that scares many practitioners because it’s new and different. Many of us don’t like change, especially when we can’t see the benefit, so we need encouragement from others to help everyone understand why true Participation works.

Some people will question moving up every rung of the ladder, some will just get on with the climb because they know they have to; some will rebel totally against change and others will be excited about reaching the top because they truly believe the benefits of being there are worth the climb.

So let’s get rid of the diagrams that just show the ideal, the goal and let’s acknowledge that we have work ahead of us.  It won’t be quick (although we all know it needs to be),  but let’s think of it as a marathon rather than a sprint.

Thanks to Kath Evans for getting me thinking about this.  It was a welcome change during the Easter holidays.

This website uses cookies to improve your experience while you navigate through the website. Out of these, the cookies that are categorized as necessary are stored on your browser as they are essential for the working of basic functionalities of the website. We also use third-party cookies that help us analyze and understand how you use this website. These cookies will be stored in your browser only with your consent. You also have the option to opt-out of these cookies. But opting out of some of these cookies may affect your browsing experience.
Necessary Always Enabled

Any cookies that may not be particularly necessary for the website to function and is used specifically to collect user personal data via analytics, ads, other embedded contents are termed as non-necessary cookies. It is mandatory to procure user consent prior to running these cookies on your website.